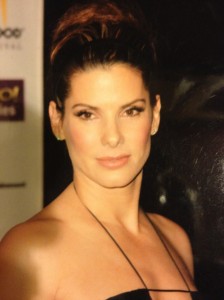 If I ever get to meet Sandra Bullock, I’m absolutely certain it will be love at first sight for at least one of us. For the moment, however, I have to content myself with a couple of postcards (fully clothed, I might add) of the world’s most beautiful woman courtesy of what has to be the world’s largest Hollywood memorabilia shop. Unfortunately, that may well have been the highlight of my day among the stars. The traffic there is just brutal, which I know is typical of big cities, but some of the LA freeways take “brutal” to heretofore unseen levels. I can’t imagine driving in this regularly: merely riding in a car as a passenger is a draining experience. Once you get to the Mecca itself, there are some impressive shops and theatres (Grauman’s Chinese Theater, which was hosting the premiere of Jack and the Beanstalk the next day, was perhaps the most impressive) but tons of tourist traps as well. If you aren’t being approached to take a picture with a transvestite in a police uniform, you’re fending off wanna-be rappers trying to foist their latest CDs upon you “for just a small donation”. Numerous tour companies compete for business on their buses to the stars’ homes, while souvenir shops compete to see who can sell the most junk at the highest prices. It’s a great place to visit (kind of) but I certainly wouldn’t want to live there. Well, unless I had Sandra to go home to…